Visit Cerro Huemules, home of the world?s most southern deer

Formerly, the habitat of the huemul extended throughout much of the Southern Cone; north to Mendoza, Argentina, and south, to the Strait of Magellan. Today only a few thousand of these deer remain, most residing in the Patagonian Andes.

When the huemul walks through the Andean forests of Patagonia, it does so with unique grace and tranquility. Thanks to its dark brown fur, it can blend in with rocks, soil and shrubs, making those rare instances of observation even more awe inspiring.  It is a majestic and noble animal; however, it is also timid and easily stressed. The huemul is not capable of surviving in captivity and the most minimal disturbance to their habitat can inspire the drastic decision to migrate in search of an area where there is still virgin nature. This is why Aysén is home to a large percentage of the world’s remaining huemul population, (if you don’t already suspect, huemul are in serious danger of extinction).

Strangely enough, a few kilometers from Coyhaique, the region’s largest city, there is a place where huemul have lived for several decades, seemingly comfortable with their habitat and surroundings, despite the proximity to civilization. The Cerro Huemul Protection Zone of the Simpson River National Reserve was established in 1976 and is the main huemul protection and research area in the Aysén Region. To visit this sanctuary, head out of Coyhaique along Route X-600 towards the Coyhaique Airport (Teniente Vidal Aerodrome) and the Río Claro Valley. A little less than one kilometer after crossing the road for the airport you will turn left onto Route X – 618, immediately after crossing the bridge. Continue along this gravel road for 14 km and you will cross over another bridge and begin to climb up the mountain along a short dirt road, which requires a 4x4 vehicle. (Tip: If you don’t have a 4x4 vehicle, park at the bottom and hike up.)

At the top, you will enjoy an amazing panoramic view of the Río Claro Valley. After taking in the view, head over to talk with the rangers, whose mission is to conserve the huemul. They can explain the history and pressures faced by the huemul: wildfires, ranching, deforestation, roads, domestic and introduced animals, and hunting. They can also help guide you on how to behave if you encounter huemul on the trails, so that ideally, the huemul barely notes your presence, and does not become stressed.

According to park ranger Rody Vladimir, “the composition of the forest has changed drastically since the opening of this protection area in 1976.  There has been a proliferation of several introduced plants like lupine and scotch broom. As well, aggressive native trees, like ciruelillo, or notro have taken over the area, so much so that it is now the dominant foliage in the landscape”.  The rangers, who work in the Reserve on a daily basis, have observed that the concentration of huemules is declining and they hypothesize that the changing composition of the forests no longer meets the needs of a large population of huemules, so many have begun to migrate further east, in search of the lenga and coigüe forests of the Cerro Castillo National Reserve, and in particular the area of the Chiguay Lagoon.

There is still a significant population of huemules in the Cerro Huemul Protection Area, however, research supports the theory that this species requires an extensive habitat where they can move freely in search of the optimal combination of attributes for their welfare.

You are likely to encounter huemules along both hikes, especially if you go with a ranger, because their acute knowledge helps them to distinguish the huemul from the natural camouflage of the landscape.  The short trail starts in the ranger post and runs along a ridge that constantly overlooks the valley below, and its forests that begin as deciduous and then abruptly change to temperate rain forest. While observing coigües, tepas, mañios, ciruelillo, canelo, tepu and chilcos, perhaps you will encounter a huemul. If you should be so lucky, stay still and avoid making noise that might startle or stress the animals. Do not take flash photography and if you want close-up shots, bring appropriate lenses.  Do not approach the animals.

The second trail is longer and more technical, climbing alongside the western shore of a stream until reaching an old logging road and a decommissioned sawmill. From here the trail makes an abrupt right hand turn, heading upward through the forest to the vegetational limit. Once above the tree line, you’ll need to find the best route to access the flat area with several small lagoons. Then, take the trail toward the pass that separates some small valleys. Once above the pass, skirt the top of the mountain (Cerro Cordillerano), along the right hand side, making your way to the next pass, known as the Filo. From here, ascend to the summit of Cerro Filo. Return following the same route. 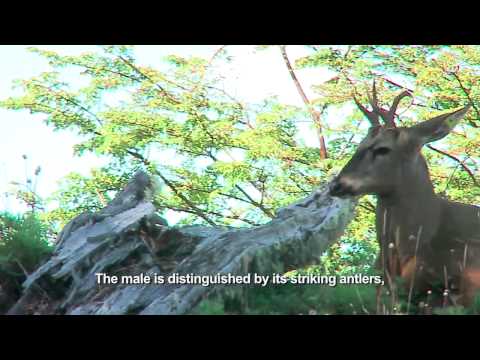 Visit Cerro Huemules, home OF the worldâ€™s most southern deer