Glacial Ice and tectonic forces have made Patagonia an incredible natural work of art and this short getaway gives you the chance to study the canvas from up close! Prepare your bike, your tent and your fishing rod and follow this 157 km route, winding around beautiful valleys, lake after lake, and river after river; all within a few hours of Coyhaique.

You have probably noticed the diverse and almost erratic variance of landscapes in Aysén; immense pampas, dense forests, jagged cliffs, green meadows and giant rocks seemingly tossed here and there. The unpredictable scenarios are almost ALWAYS intercepted by water; fjords, rivers, lakes, lagoons and cascades; practically everywhere you look. These landscapes are the testimony of glaciations, a natural phenomenon that began on the planet 3 million years ago. The most recent glaciation ended approximately 10,000 years ago.

If we could step back millions of years in time, the planet would look completely different. Imagine scheduling your time machine to go back a little more than two million years and taking the opportunity to walk from Siberia to Alaska without any problem. Or 700 thousand years ago, when Coyhaique was completely covered over by a giant ice field. In fact, the entire Southern Cone was covered by glaciers and as warming began to melt the ice, you could navigate to Argentina through the El Blanco and Simpson Rivers, because in this time, the waters drained toward the east.

We may not have a time machine but if you use the clues and visible traces on this 157 km route, your imagination can provide the means to recreate the icy wonders that molded the incredible landscapes between Coyhaique, the sector of Six Lagunas, and the route between Elizalde Lake, the Paloma River and Caro Lake. The route is easily traveled in a day by 4x4 vehicle, with time for a picnic and a few hours of fishing. And if you’re looking to get away for a long weekend, we suggest biking the route as a three or four day expedition. It will give you the opportunity to get closer to the sites on this beautiful route, and your slower pace will give you time to notice and appreciate the details.

The circuit starts and ends in Coyhaique.

Depart from the Plaza de Arms on Paseo Horn, heading southwest toward Arturo Prat. Take a left, continue 4 blocks to Av Simpson and turn right, advancing a couple of blocks to the road on your left that descends toward the Simpson River. You’ll soon pass over a hanging bridge. Take a look toward your right and you’ll see the Piedra del Indio (Rock of the Indian), a weathered rock cliff that has been molded by the force of the winds to resemble an Indian brave; a great first example of what nature can do to a landscape.

Follow this road through the El Claro Sector and veer right at the fork, taking the next left (Km 3) for Route X-608, and the Coyhaique Airfield. Pass the airfield in continue straight passing a series of farms and forest sectors that border the Simpson River.  Around Km 16 you will pass a beautiful cascade before coming to a crossing where there is a giant wall of sand to the right, the remnant of a giant ancient lake that formed during the retreat of the glaciers and covered much of the valley you will soon be moving through. Turn toward the left, entering route X-648 and the Six Lagunas Sector.  For the next 20 km you will see a multitude of lakes and lagoons and spectacular scenery. The landscape is full of blues and greens, flowers, fields, and you will likely spot a variety of migratory birds. Millions of years ago, this entire landscape was under a gigantic ice field and later, when the ice receded, an enormous lake was formed that extended throughout this entire route. If you look closely in the Seis Lagunas Sector, you will make out the borders of this ancient lake, which shrank during the centuries; appearing like contour markers on a giant living map.

In km 36 you will come to a crossing. Take the road on the right (Route X-686), which winds for approximately 48 kilometers bordering Elizalde Lake, the Paloma River and, finally, Caro Lake. As you border the Elizalde Lake, pay attention for the clues of the ancient moving ices that are all around you: smooth and polished rocks that are often scarred by deep scratches marking the path of advances and retreats. Elizalde is one of the most well-known and visited lakes in the region, with a public beach, camping areas, various cabanas, a rural hospedaje and  various boat operators who offer fishing excursions. This is a great lake for trout!

The next section takes you through farm lands on the way to the Paloma River Valley. Keep watch for a strange honeycomb like rock formation on the overhanging rock wall you will see on your left in Km 47.  This rock formation is called columnar jointing and it’s formed within basaltic lava flows like this during the cooling process. When the lava cools rapidly from the outside in, often as a result of being submerged in river currents, shrinkage occurs and causes cracks to form in this unique and beautiful hexagonal pattern. Looking at this incredible formation, you can imagine this landscape taking shape after hundreds of thousands of years under ice. The eruption of volcanoes shaped new contours in the recently exposed land and the retreating ice was giving force to giant rivers. Thus, in this very spot, the river’s waters cooled the lava and formed these perfect hexagons. Now, hundreds of thousands of years later, your travels have brought you to this very spot, to observe and imagine these ancient landscapes.

You’ll enter the Paloma River Valley crossing over a beautiful gorge formed by the River, which then winds through a relatively narrow valley, bordered on both sides by high peaks that are snow-covered in winter and reveal tiny (but impressive), glaciers during the summer, the last remnants of the ultimate glacial age. There are good campsites and excellent fishing at the edge of the river.

As you continue through the valley on the way to Caro Lake, the landscape transform again, with thousand year old forests and the photogenic corrals, horses and farm houses of the sectors rural ranches. The lake is surrounded by forest of tepas, coigües, mañíos and arrayanes, providing an evergreen exuberance that shelters the rocky beach with plenty of wooded areas for camping.

Return along the same path to its junction with the track of the sector Six Lagoons, where you must bend to the right and move forward a couple of kilometers toward the junction opposite the small village of Villa Frei. Turn left and follow this road for approximately 10 Km, passing the village of Simpson Valley up to the junction with Route 245 which runs between Balmaceda and Puerto Aysén. Veer to the right and at 19 km you’ll be back in Coyhaique. 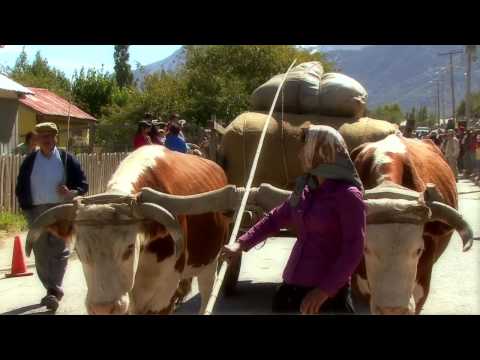 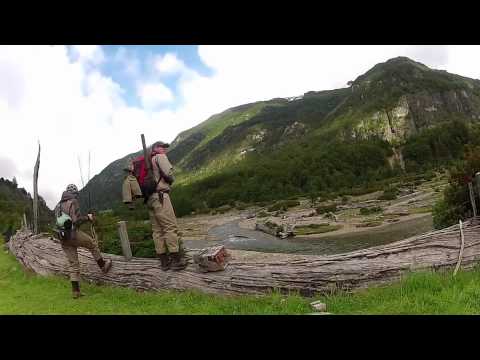