Artisan fruit-infused liqueurs are found throughout the Chile, but in Aysén they take on unique characteristics. The purity of the water and intense climate provide a special essence to native fruits. When blended with family traditions and expertise, the result is amazing flavor and color - unique concoctions that you won?t be able to resist taking home to share with friends.

When you visit the Aysén Region you’re surrounded by its beautiful landscapes, full of intense colors, scents and flavors, especially if you time your trip with the summer season, when the countryside is full of wild fruits, like murta, calafate and wild strawberries, as well as fruit trees like cherries, apricots and raspberries. Wouldn’t you love to be able to bottle these sensations to carry them home? You can!

In fact, many Aysén families have a long-standing tradition of capturing summer and bottling it up for a little bit of sunshine during the long months of winter. How? By steeping handpicked berries and fruits in Chilean Aguardiente, an alcohol made like Italian grappa, by distilling the left over grape residues, after pressing for wine making. Using a special artisan process and fruits picked at the perfect height of their ripeness, you can literally capture and preserve the essence of a place. And just 23 kilometers outside of Coyhaique, you can spend a day with a master of artisan liqueurs, Señora Norma Quijada de La Hoz, and learn the entire process of bottling up summer – from the search for the perfect fruits to the tasting at the end of the day; and, you take home a bottle of this magic, with the essence of Patagonian summers captured in every delicious drop.

The adventure begins 23 km south of Coyhaique, in the family farm of Don Hernan Riquelme Jara and his wife, Señora Norma Quijada de La Hoz.  Depart Coyhaique toward the Balmaceda Airport and turn left after 14 km, at the crossing for El Fraile (Route X-667). Continue along this route for approximately 7 km, until you reach Route X-659, marked with signs indicating Lago Frio. Take a right and drive another two km to a beautiful farm on the right hand side, which is home to the Quincho Don Santiago, a rural banquet house. The farm sits up on the hill and overlooks a panoramic view of Frio Lake, located just on the other side of the road. You’ll probably find Señora Norma working in her greenhouse or garden, or preparing marmalades, liqueurs or some other goodie in the Quincho. This farm originally belonged to pioneer, Belisario Jara, Hernan’s grandfather. Norma’s family also lived in the sector and they had always been friends, until, one magical day, they fell in love and later, decided to marry. They decided to live in the farm and restored Belisario’s historic home together, continuing the family traditions of ranching and farming. Norma learned how to make liqueurs from her mom who had learned from her own mom, Norma’s grandmother.  The process is actually pretty straightforward; but, according to Norma, there are two important secrets that absolutely cannot be ignored. First, capturing the essence of Patagonia requires harvesting the fruits at the absolute height of their ripeness. Second, success demands patience; the marinating process can take up to six long months. You probably don’t have that much time in Patagonia; so, we suggest a bit of “paying it forward”. Spend the day with Señora Norma and Don Hernan and learn the tradition. Your batch will go into the queue, ready for a future visitor who, like you, is looking for the magic way to bottle Patagonia and take its essence home.

The flavors and culinary knowledge can be a memorable aspect of his travels in Aysén. Every corner has its own recipes and dishes . Discover your favorite recipes here. 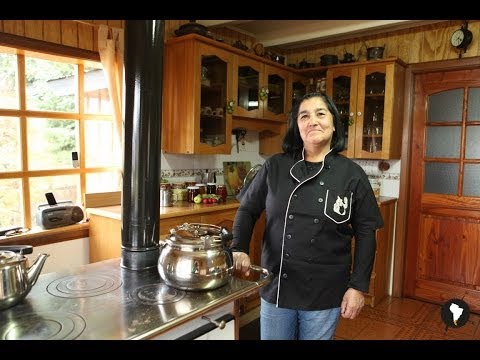 Glacial Ice and tectonic forces have made Patagonia an incredible natural work of art and this short getaway gives you the chance to study the canvas from up close! Prepare your bike, your tent and your fishing rod and follow this 157 km route, winding around beautiful valleys, lake after lake, and river after river; all within a few hours of Coyhaique.