Bring an appetite when you visit the capital of Merluza Austral!

Each year during the last weekend in January the town of Puerto Cisnes celebrates the Fiesta del Pesca?o Frito ? a Patagonia style version of a giant fish-fry. Thousands of visitors pour into town during this three-day festival, ready to enjoy great music, fun local customs and of course, delicious Merluza Austral (Southern Hake), an icon of the fjords and channels of Aysén.

Nestled between Queulat and Isla Magdalena National Parks, Puerto Cisnes and its residents celebrate the traditions and history of the fjords and channels of Aysén, which have been heavily influenced by the Grand Island of Chiloé, the original home for many of the area’s settlers.

The annual Fiesta del Pesca’o Frito is their biggest celebration, organized by the community as a way of celebrating traditions, great food, great music, community and fellowship. The star of this festival is always the same – delicious Merluza Austral!

The celebration lasts all weekend and one of the most exciting and special events occurs Saturday, right after lunch. It’s called a Minga Cisnense and it celebrates a tradition that began in Chiloé and has been transferred to towns of Aysén, owing in grand part to the work and mission of Padre Antonio Ronchi.

Father Antonio Ronchi arrived in Chile in 1960, at the age of 30, and dedicated the remainder of his life to work within her most rural and isolated communities. He helped them improve basic infrastructure and build social capital, with a unique style that enabled ALL to participate. One of the unique aspects of Father Ronchi’s style was his use of what is called a “minga” approach, something he had borrowed from the Island of Chiloé, a bit further north in Chile, where many of the Aysén settlers had ties.  When communities in Chiloé had challenges or problems to address, people came together to solve them as a community; each making a personal contribution to the project, based on their individual talents and resources. In Aysén, Father Ronchi would go door to door, calling on each and every person in the community, asking for their help. From donating wood and supplies to putting in hours of hard labor in construction, to providing food for the workers; everyone in the town would help in some way or another. This is one of the main reasons why Father Ronchi is still so highly praised; beyond helping build infrastructure, he helped connect communities.

In Puerto Cisnes, the minga is more alive than ever, thanks to the Fiesta del Pesca’o Frito, the municipality and the hard work of the community. Each year before the festival, the community elects a local family in need of a new house.  The house is constructed using municipal funds and then raised onto a special raft. On Saturday morning, during the festival, it is floated out into the harbor and a giant floating boat parade accompanies it, as it makes its way through the water to the main docks of town. From here, the whole town and thousands of festival participants join forces, tugging the house along the streets of town with huge ropes, until it reaches the lot where it will be placed.  Of course, the hard work is followed by an enormous party, with a giant fish-fry, local music and dance, artisan beer and lots more. At other points in the weekend you can peruse local arts and crafts exhibits for the perfect souvenir or take part in kayak excursions, hikes or visits to the local beach.

Don’t worry if your visit does not coincide with the festival; there’s great food in Puerto Cisnes year round.

You’ll find some of the best restaurants in town in the blocks between the Plaza and the waterfront, all of which feature the classic dish, Fried Merluza Austral. You can also try merluza broiled or grilled or sample other local favorites, like congrio and salmon and of course, great steaks and lamb. Some of your choices include the Río Mar Restaurant, which features grilled merluza, congrio or salmon, with Russian salad and seafood empanadas, the Guairao Restaurant, which offers a peaceful atmosphere and a wide variety of traditional Patagonian dishes, the Panchita Restaurant, which offers a great variety of fish and shellfish during the season, and the Monchito Restaurant, with daily specials, like puye, a delicious local fish, and “merluza a lo pobre”, which consists of fried merluza topped with french fries, sautéed onions and a fried egg.

You’ll also want to stop in to visit the Finisterra Brewery with seven varieties of delicious local-crafted beer, brewed with the waters of the cascades from the Queulat watershed.  Tour this family brewery, owned by the Saavedra family, to learn about their history and processes and sample their delicious brews.

For afternoon tea visit Tour Bellavista, to sample their sandwiches and organize a fishing or kayak trip, on the rivers and lakes near town. 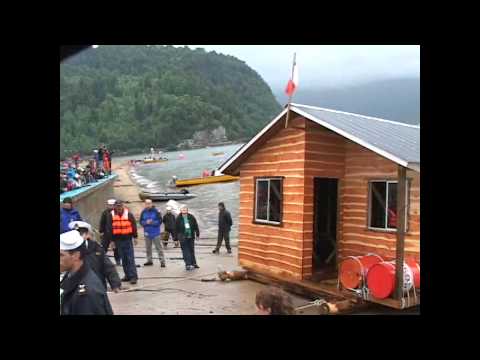 In the course of a few hours, Puerto Cisnes will fill your senses with tastes, sights, sounds and textures. Meander through coastal landscapes, walk along the beaches, sample local flavors and be amazed by the sounds of an orchestra of frogs and toads in the evening. This self-guided tour will help you learn your way around.